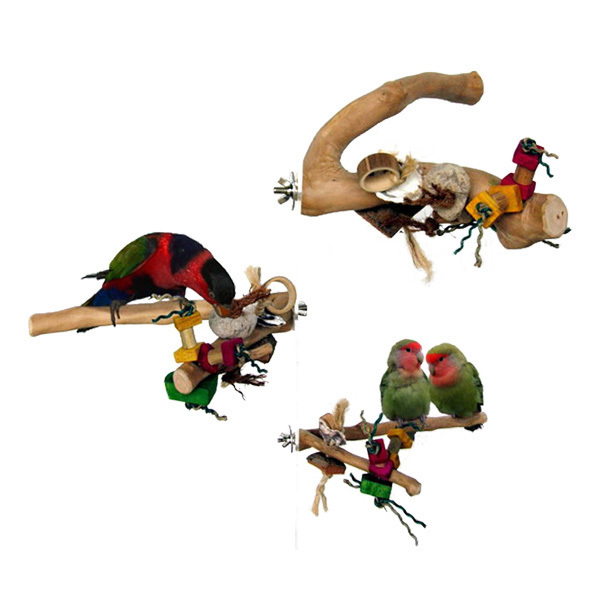 Introduction: My name is Stanley Sands, I have been around parrots since I was in Africa as an adolesent child.

My parents employed by the U.S. State Department, in Nigeria and Ethiopia, exposed me to a lot of exotic creatures at a young age, including a trio of African Grey Parrots, which they legally imported to the U.S. in the late sixties.

Eventually, as an young adult, I ended up,with one of the three imported Greys, thus beginning my almost 40 years experience living with compainions parrots.

Although I do not claim to be an expert on parrot behavior, my first pet parrot, because he was wild caught in Africa, taught me a lot about Natural Instictive Behavior In Parrots.

Later on, he showed me how certain bird toys help stimulate a parrot's natural instict to chew, and forage. This playing with chewable bird toys, foraging toys and other available stimulus  re-enforced that natural behavior.

A number of studies of various species of parrots in the wild have shown that parrots have the natural instinct to Chew on things, often a tree branch or some kind of nut or fruit with a hidden food reward inside.

My first eperiences with "Junior", my first and only "wild caught", pet parrot taught me the importance of having stimulating bird toys on hand to vent natural instincts to chew and destroy things.

On several occasions, when I had left Junior to roam outside his cage, he actually destroyed an entire section of door molding in a matter of hours. When I started deploying Chewable Bird Toys as a baby sitting option, I found his attention could be diverted from destroying the room, to chewing on his toys.

Birds in the wild also have the instinct to forage for food.

This involves flying in flocks and searching for food sources in a variety of places, including trees, or on the ground.

In captivity your parrot is not normally a member of a flock, nor does he have the option to fly around looking for food.

Fortunately we have ways at home to simulate natural foraging activity by hiding treats and food items in toys or other things such as a paper bag loaded with treats, thus encouraging narural foraging.

My domestic raised African Grey loves to sit and swing on her perch swing, my Blue Fronted Amazon likes to chew up the very perch he stands on, and my Umbrella Cockatoo prefers to shred newspaper, and preen with fuzzy toys.

A successful home environment for your parrot will have as many the things as possible that copy the forest canopy in the wild.

Perches and swings help simulate the swaying branches and solid limbs on which he might climb, play sleep, and forage for food.

Conclusion: A pet bird that is left in a cage with nothing to do other than eat or sleep will become bored, and will most likely develop behavior problems, such as excessive screaming, biting, or feather plucking.

Furthermore, the home environment, people who live with their parrot, or parrots, become "part of their flock."

Parrots instictively need the socializing the flock provides, and if you don't spend time with your flock, behavior problems will most likely occur.

Parrots have the inate intelligence of a 3 to 5 year old child, and need attention similar to what your human child, of that age, would need.

However, when you can't be there  with your bird, such as when you have to be at work, its much better to give them a variety of perches and swings, plus stimulating bird toys such as chewable, and foraging toys.

By keeping your parrot busy with toys and other goodys that support his natural instincts to chew, play and forage, your parrot will be a  better behaved bird overall.

Our website uses cookies to make your browsing experience better. By using our site you agree to our use of cookies. Learn More I Agree
× What Are Cookies As is common practice with almost all professional websites this site uses cookies, which are tiny files that are downloaded to your computer, to improve your experience. This page describes what information they gather, how we use it and why we sometimes need to store these cookies. We will also share how you can prevent these cookies from being stored however this may downgrade or 'break' certain elements of the sites functionality. For more general information on cookies see the Wikipedia article on HTTP Cookies. How We Use Cookies We use cookies for a variety of reasons detailed below. Unfortunately in most cases there are no industry standard options for disabling cookies without completely disabling the functionality and features they add to this site. It is recommended that you leave on all cookies if you are not sure whether you need them or not in case they are used to provide a service that you use. Disabling Cookies You can prevent the setting of cookies by adjusting the settings on your browser (see your browser Help for how to do this). Be aware that disabling cookies will affect the functionality of this and many other websites that you visit. Disabling cookies will usually result in also disabling certain functionality and features of the this site. Therefore it is recommended that you do not disable cookies. The Cookies We Set
Account related cookies If you create an account with us then we will use cookies for the management of the signup process and general administration. These cookies will usually be deleted when you log out however in some cases they may remain afterwards to remember your site preferences when logged out. Login related cookies We use cookies when you are logged in so that we can remember this fact. This prevents you from having to log in every single time you visit a new page. These cookies are typically removed or cleared when you log out to ensure that you can only access restricted features and areas when logged in. Form related cookies When you submit data to through a form such as those found on contact pages or comment forms cookies may be set to remember your user details for future correspondence. Site preference cookies In order to provide you with a great experience on this site we provide the functionality to set your preferences for how this site runs when you use it. In order to remember your preferences we need to set cookies so that this information can be called whenever you interact with a page is affected by your preferences.
Third Party Cookies In some special cases we also use cookies provided by trusted third parties. The following section details which third party cookies you might encounter through this site.
This site uses Google Analytics which is one of the most widespread and trusted analytics solution on the web for helping us to understand how you use the site and ways that we can improve your experience. These cookies may track things such as how long you spend on the site and the pages that you visit so we can continue to produce engaging content. For more information on Google Analytics cookies, see the official Google Analytics page. We also use social media buttons and/or plugins on this site that allow you to connect with social network in various ways. For these to work, the social networks may set cookies through our site which may be used to enhance your profile on their site, or contribute to other purposes outlined in their respective privacy policies.